The Birth Place of Srila Prabhupada

Sri Chaitanya Mahaprabhu, the pioneer of the modern Hare Krishna movement, appeared in Mayapur, West Bengal over 500 years ago. He is Krishna Himself, who appeared to inaugurate the yuga-dharma – the Harinama Sankirtana (congregational chanting of the holy names of the Lord). He never disclosed Himself as the incarnation of the Lord and exemplified the life of a perfect devotee, so that others can follow in His footsteps. However, this fact is corroborated in many authorized scriptures and also confirmed by great spiritual masters of our sampradaya. The descriptions of Lord Chaitanya in terms of His appearance, bodily features, characteristics and pastimes as found in the several works of His celebrated associates and great devotees completely conform to those predicted in the Vedic literatures. In this article we present certain important verses from some of the well-known Vedic literatures to substantiate the identity of Lord Chaitanya as the Supreme Lord Krishna. 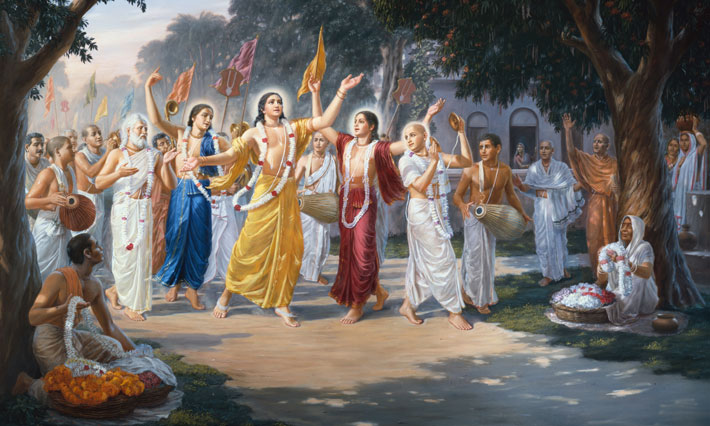 In the age of Kali, intelligent persons perform congregational chanting to worship the incarnation of Godhead who constantly sings the holy name of Krishna. Although His complexion is not blackish, He is Krishna Himself. He is accompanied by His associates, servants, weapons and confidential companions.

krsna-varnam: This word denotes that Lord Chaitanya belongs to the category of Krishna or in other words He is Krishna Himself. krsna-varnam also means one who constantly chants the name of Lord Krishna.

sangopangastra-parsadam: Lord Chaitanya is always accompanied by His confidential associates like Lord Nityananda, Advaita Acharya, Sri Gadadhara Pandita, Srivasa Acharya, Haridasa Thakura, etc. In other incarnations, the Lord sometimes made use of His weapons to defeat or kill the demons, but in this age the Lord subdues the demonic mentality with His all-attractive figure of Chaitanya Mahaprabhu who freely distributes Krishna-prema, pure love of Krishna. That is His weapon.

Each of the 1000 names contained in the Vishnu-sahasra-nama stotra that is found in the Mahabharata, glorifies one or more aspects of the Supreme Lord’s transcendental forms, qualities, pastimes etc. 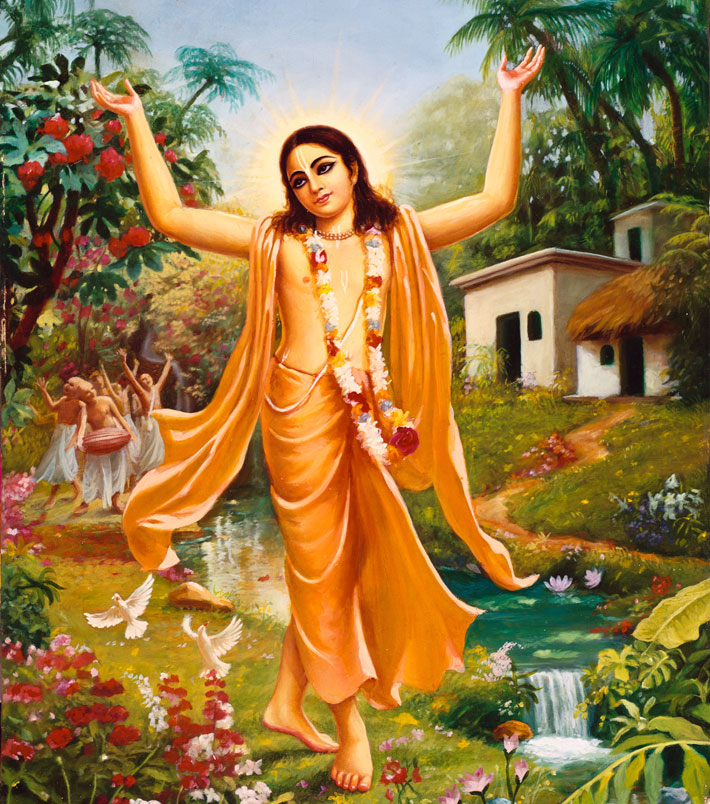 The following names indicate the bodily features of Lord Chaitanya.

suvarna-varna: He has a golden complexion.
hemanga: He has the appearance of molten gold.
varanga: He is exquisitely beautiful.
candanangadi: The Lord’s body is smeared with sandalwood pulp.

Lord Chaitanya’s qualities and activities are described in the following names.

sannyasa-krt: He accepts the renounced order of life. (Lord Chaitanya accepted sannyasa at the age of 24.)

sama: He is fully sense-controlled or equipoised.

santa: He is completely peaceful.

nistha: He is rigidly fixed in the chanting of the holy name of Lord Krishna.

santi-parayana: He is the highest abode of devotion and peace. He silences the impersonalist philosophers. (Lord Chaitanya defeated many eminent mayavadis in philosophical debates and converted them to Vaishnavism.) 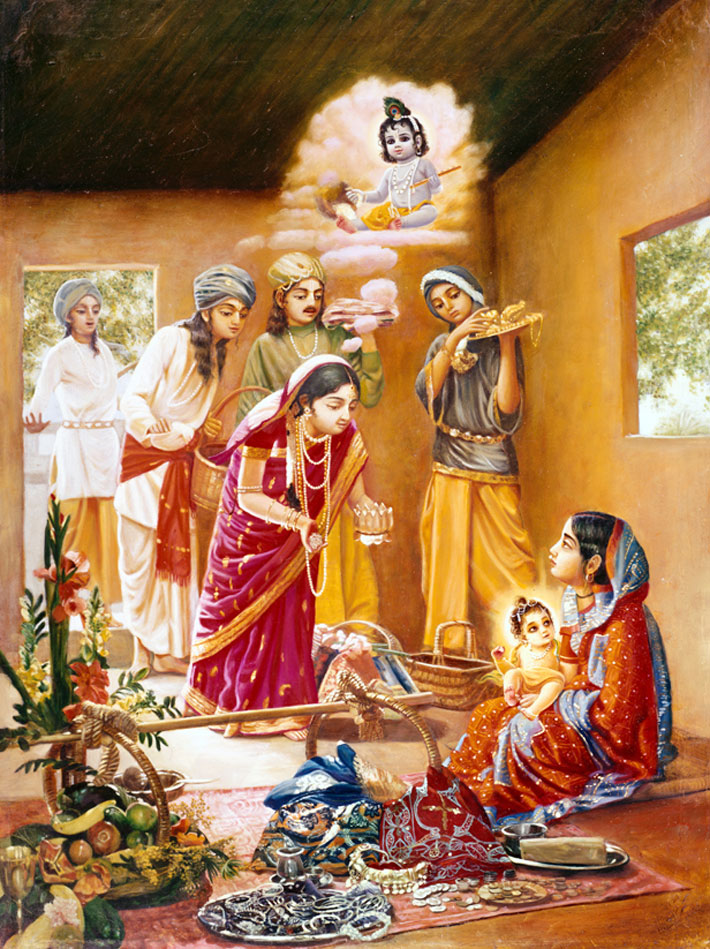 In the first part of Kali-yuga, I will appear in my complete spiritual form in Mayapura, Navadvipa and become the son of Shachi.

Sri Chaitanya was born in Mayapura (a subsection of the holy town of Navadvipa, West Bengal) as the son of Srimati Shachi devi in the year 1486, about 4,500 years after the beginning of the Kali-yuga. 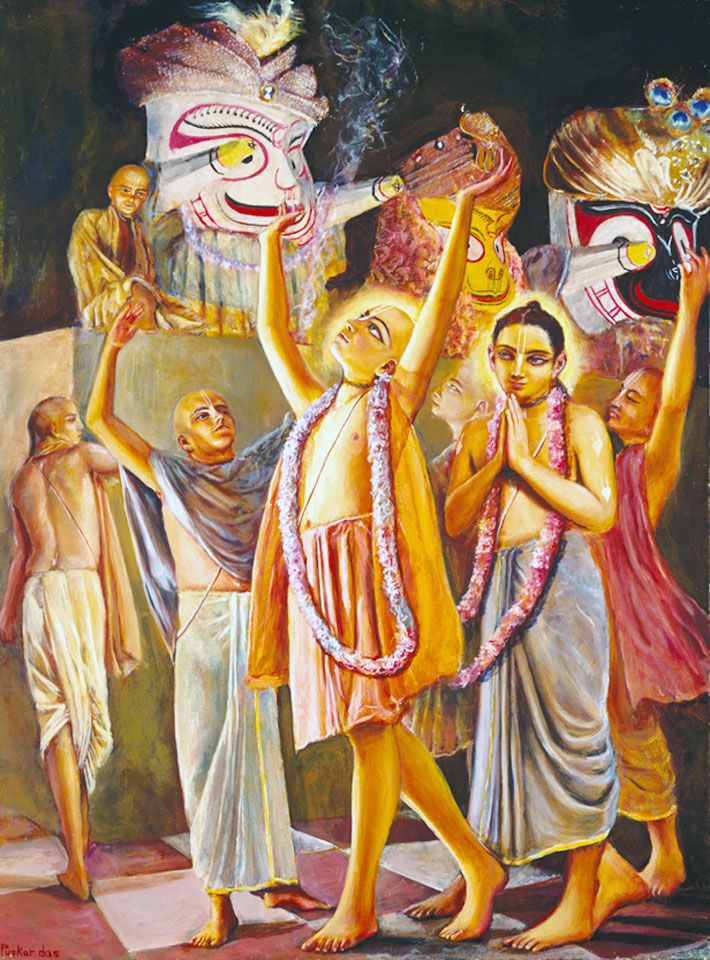 It is also stated in this purana,

In the first part of Kali-yuga, the Supreme Lord in the golden complexion will become the husband of Lakshmi. Then He will become a sannyasi and reside near Lord Jagannatha.

Sri Chaitanya married His eternal consort Srimati Lakshmipriya and later took sannyasa at the age of 24. After the acceptance of sannyasa, He left Navadvipa and resided in Puri, the holy city of Lord Jagannatha in Orissa. Lord Jagannatha in Puri is also referred to as daru-brahma in the Puranas as the Deities here are made from Neem wood. The word daru means wood in Sanskrit. 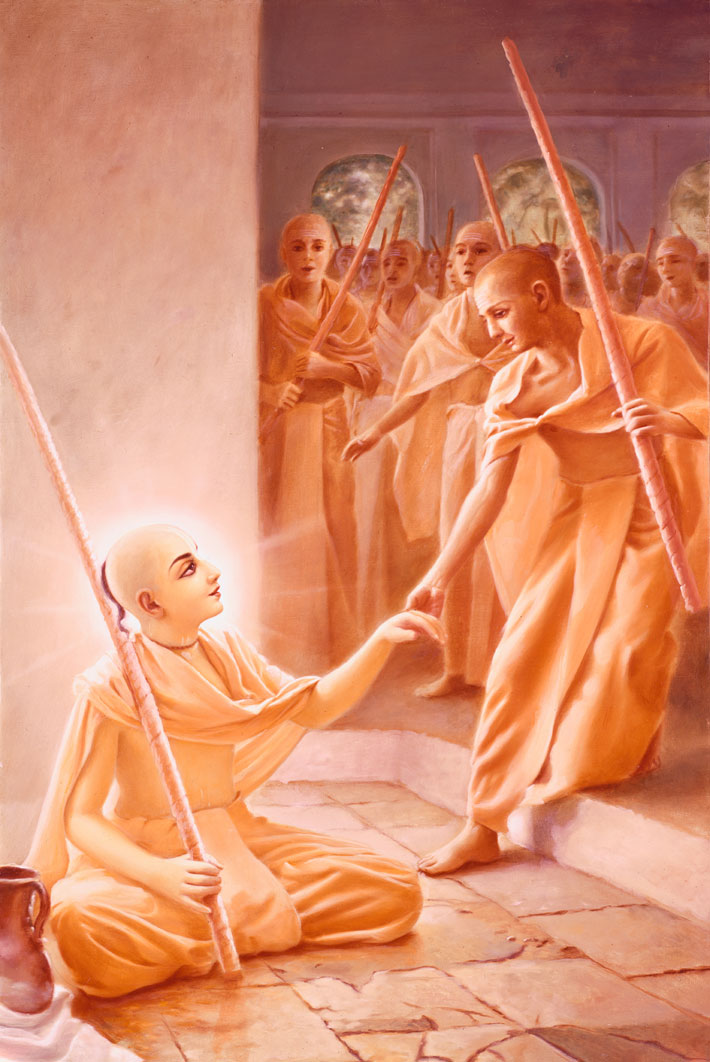 The Supreme Lord who took delight in His pastimes with the gopis, who filled the residents of Vrindavana with joy day and night, who slew Kamsa, and who made friends with the Pandavas in the battle between the Kauravas, will without any doubt, come again to the earth. He will be a sannyasi with the name Chaitanya whose arm will be decorated with a bamboo stick.

It is clear from this verse that Lord Krishna Himself appeared as Chaitanya Mahaprabhu. According to the custom, a sannyasi is supposed to carry a bamboo stick (danda). Lord Chaitanya carried a single bamboo stick as He was an eka-danda sannyasi.

The Supreme Lord who assumed the form of a half-man, half-lion in the Satya-yuga to cure a dreadful disease that had devastated the Daityas, and who appearing as Rama conquered the ten-headed Ravana in the Treta-yuga, and who removed the burden of the earth in the Dvapara-yuga and protected the cowherd men of Vraja-pura, will be the Lord by name Chaitanya in the Kali-yuga. He will have a golden form and He will take pleasure in chanting the Lord’s holy names.

I shall take birth as the son of Shachi assuming a golden form in a beautiful place on the bank of the Bhagirathi (Ganges) on the earth in the first part of Kali-yuga.

Mayapura, the birth place of Sri Chaitanya is on the banks of the Ganges. There is a similar verse in the Brahma Purana predicting the appearance of Lord Chaitanya.

The Supreme Personality of Godhead says,

O brahmana, I will deliver all the worlds, concealing myself in the form of a devotee of the Lord in Kali-yuga.

O demigods, please advent on the earth as devotees in Kali-yuga. To inaugurate sankirtana, I will incarnate as the son of Shachi. 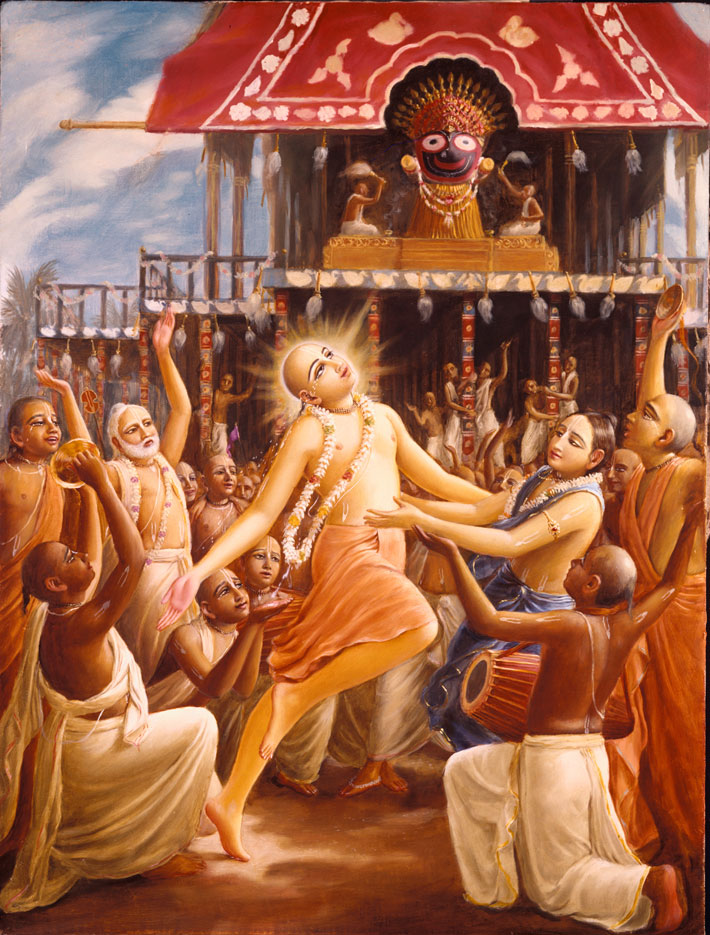 O austere sage, everyone will see My transcendental form as a sannyasi in the age of Kali. I will be displaying symptoms like shedding tears of bliss and hairs standing on end out of ecstasy.

Lord Chaitanya was always merged in the ocean of transcendental ecstasy while chanting the names of Krishna and dancing during sankirtana. He felt intense separation from the Lord and due to those devotional feelings displayed various ecstatic symptoms of pure love for Krishna, such as incessant tears, voice choking up, hairs on the body standing on end etc.

On the full moon day of the month of Phalguna, conjoined with the star Phalguni, I will appear in a golden form begotten by Purandara in the womb of Shachi.

Lord Chaitanya was born on the full moon day in the month of Phalguna. His father was known by the names Jagannatha Mishra and Purandara Mishra.

I will appear in a brahmana family in Navadvipa, by the shore of the Ganges. 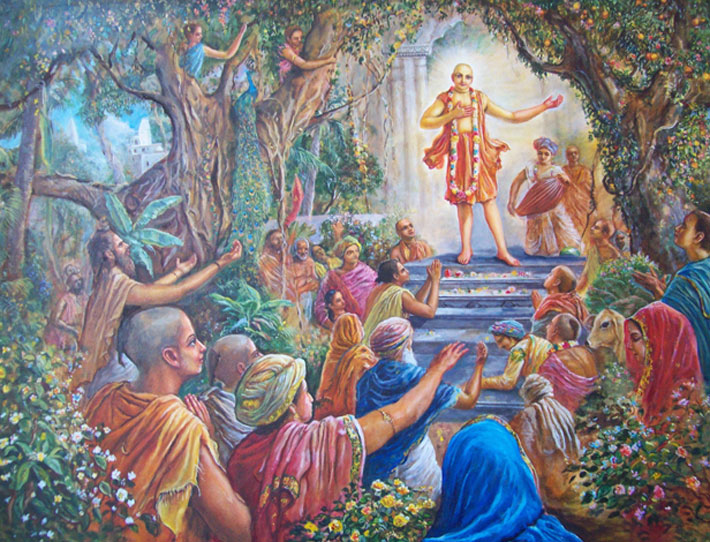 In order to engage the people in devotional service and bestow mercy upon them, I will take sannyasa, accepting the name Krishna Chaitanya.

The following statement is made by the Lord:

In the age of Kali, I will be golden colour. I will be tall and will have a shaven head. The place where I take birth will be a meeting point of three rivers. I will be very merciful and I will keenly engage in chanting the holy names.

Lord Chaitanya, being an eka-danda sannyasi had a completely shaven head as was the custom for such sannyasis. Three rivers – the Ganges, the Yamuna and the Saraswati (which is currently in her hidden form) – flow at Navadvipa. Inwardly Krishna but outwardly of golden form, I will be accompanied by My associates, servants, weapons, and confidential companions. Taking My birth in the womb of Shachi, I will accept the role of a human being.

This site uses Akismet to reduce spam. Learn how your comment data is processed.

LIVE THE LIFE OF A MONK