The Ongoing divine PASTIMES of The Lord

Many times my wife and I discuss how blissful would have been the experience of those fortunate souls who were present during the various pastimes of the Lord. I am sure many people wished to be present during the period when Lord was carrying out His pastimes. Even we two used to repent many times, wishing, if we could be present then until we realized we are already present in an ongoing divine pastime of The Lord.

Lord Krishna, who is the son of the King of Vraja, became the son of Saci (Lord Caitanya), and Balarama became Nitai. 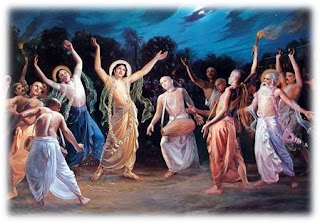 During Chaitanya Mahaprabhu’s pastimes, thousands and thousands of souls, as fallen as Jagai and Madhai were blessed by the Lord and delivered from this material world, with the potency of Hari Naam.

The holy name delivered all those souls who were lowly and wretched. The two sinners Jagai and Madhai are evidence of this.

Hari Naam or Hare Krishna Mahamantra has nothing to do with this material world. It is golokera prema-dhana, which means “The treasure of divine love in Goloka Vrindavana has descended as the congregational chanting of Lord Hari’s holy names.”

Taking the sharp sword of the congregational chanting of the Holy Name, I will root out and destroy the demoniac mentality in the hearts of the conditioned souls. If some sinful people escape and giving up religious principles go to far off countries, then My commander in chief (Senapati Bhakta) will appear to chase them and distribute Krsna consciousness.

His commander in chief (Senapati Bhakta) is none other than His Divine Grace A.C. Bhaktivedanta Swami Prabhupada, who was deployed from Spiritual world to deliver souls across the globe.

So actually the divine pastimes of Sri Chaitanya Mahaprabhu have not yet come to an end. We are in an extension period of His pastimes (The Golden Era) and we are so much fortunate to be present in this age.

Having said and understood our fortune, we must not forget that when Lord was physically present in front of Hiranakashipu, Hiranyakshya, Ravana, Kansa, Duryodhana, Chand Kazi, Jagai, Madhai and all other demonic personalities, none of them could understand that He was The Supreme Personality of Godhead.

It happens every time in every age, it is only a few fortunate souls who make use of their intelligence and thus can understand. While others blinded by their false ego and pride, use their own speculative intellect and reject their only savior, The Supreme Lord.

Therefore how fortunate or how unfortunate we are, actually depends on us, our consciousness, our intelligence. Needless to say, we must be really intelligent and active not to miss the opportunity that has been graced upon us.

In Chaitanya Bhagvat Mahaprabhu himself said,

Which means that the holy name will be preached in all the villages and towns of the world.

This is an intimate desire of Lord Sri Chaitanya Mahaprabhu. Thus the Krishna Conscious movement was established by The Supreme Lord Himself. And to fulfill His desire, is the heart and soul of all the Vaishnava Acharyas in His lineage.

After Sri Chaitanya Mahaprabhu, His teachings were widely propagated by the Shad Goswamis (Srila Rupa Goswami , Sanatana Goswami , Jiva Goswami , Raghunatha Bhatta Goswami , Gopala Bhatta Goswami & Raghunatha Dasa Goswami ). Then their disciples further took the responsibility of spreading the Holy Name. This auspicious mission of Krishna Consciousness was later given a form of “society” by Srila Prabhupada and came to be known as the International Society of Krishna Consciousness, better known as ISKCON.

And we can see in this cold freezing darkness of Kaliyuga, how ISKCON has spread like a warm blanket across the entire globe. Disciples of Srila Prabhupada are now continuing the mission of spreading God Consciousness or Krishna Consciousness by spreading the Holy Names. 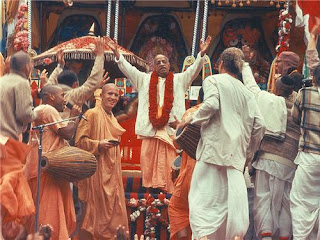 We have a great opportunity to associate ourselves with Sri Chaitanya Mahaprabhu’s movement that was started 500 years back by Lord Himself and is still going on. It is His pastime.

Let us pray that may we never be bewildered by the lifestyle of any bewildered souls and reject this rarest of rare opportunity to associate ourselves with Lord’s Pastime.

Previous Story
Todays’s Darshan 27/12/2017
Next Story
As long as staying where we are remains bearable, we rarely move forward