Concerned about India’s falling rank on the Global Hunger Index, ISKCON Food Relief Foundation’s Haryana chapter is to launch a campaign against hunger. Through this campaign, the foundation aims at eradicating hunger and malnutrition from India starting with the Haryana State.

The recently announced Global Hunger Index (GHI-2017) is nothing less than an alarm bell for India. The country ranked 97 in GHI-2016, but has slipped to 100 this year. Concerned about the declining rank, ISKCON Food Relief Foundation, Haryana Chapter, has decided to launch an extensive campaign to fight hunger.

The campaign will bring together the government, corporate houses, MNCs, startups, celebrities, activists and volunteers in support of the cause. United with the mission to eradicate hunger, ISKCON Food Relief Foundation Haryana will work to enhance its kitchen capacity and reach so as to provide nutritious meals to more and more people.

Talking about the hunger index, Dhananjay Krishna Das, Vice Chairman, ISKCON Food Relief Foundation, Haryana said, “GHI measures hunger not as lack of food but in terms of nutrition. The index has different parameters like under-nourishment (insufficient food or calorie intake), child wasting, child stunting and child mortality. We should not misinterpret the fall in rank as rise in starvation. It’s all about a complete, nutritious meal. We will do all that we can with our given resources to help beat hunger in the state.” 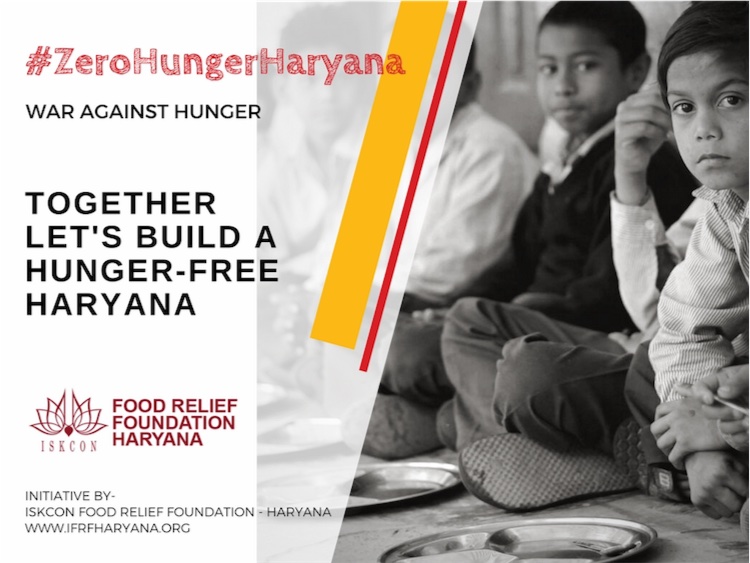 The food distribution system has improved and poverty is on decline. But studies show that food subsidy and monetary benefits don’t reflect in nutrition measured by per capita calorie intake, per capita protein intake, and per capita fat intake. There is a huge population that keeps complete nutrition on least priority and sticks to eating only to kill hunger. That’s one reason why direct benefit transfers are not recommended as replacement of meal programs.

The war against malnutrition and hunger has to be fought on multiple fronts: better governance of nutrition-focused schemes for children and mothers, improving access to safe drinking water and sanitation, and better access to health services for the poor.

Haryana faces a challenge given that WHO considers poor nutrition the single most important threat to world health. Malnutrition also compounds issues related to poverty, trapping individuals in its vicious cycle. 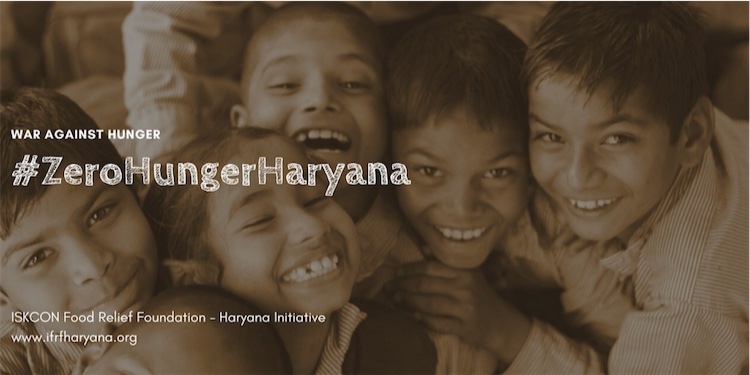 “Our vision is to ensure zero malnutrition amongst children and adequate, and safe and nutritious food for all residents of Haryana, particularly women of reproductive age, children and extra-vulnerable populations,” added Dhananjay.

Currently, the ISKCON Food Relief Foundation is serving more than 3,50,000 healthy meals every day in more than 2500 schools of Haryana under mid-day meal scheme.

ISKCON Food Relief Foundation Haryana is a Food for Life organization that serves more than 3.5lakh meals every single day in more than 2,500 schools through its 4 state-of-the-art kitchens across Haryana. The free of charge meals are provided to children under Mid-Day Meal scheme. The foundation serves hot and fresh meals, prepared with the highest standards of hygiene and quality ingredients that meet the nutritional requirements of growing children.

Previous Story
Todays’s Darshan 17/12/2017
Next Story
Ekagrata is not just a state of attentiveness; it is also a level of consciousnesses